我是女神的利刃！
I am the blade of the Goddess.

The Sisterhood of Elune (aka the Sisters of Elune or simply the Sisters) are the oldest night elf religious and magical order, predating the quel'dorei by some 2000 years. As the name implies, they are an order of priestesses dedicated to the worship of the moon goddess, Elune — priestesses of Elune. This ancient night elven order remains in existence to this day and, as their name implies, entrance to its upper echelons is available exclusively to women, on the belief that Elune's deepest mysteries can only be understood by a woman's heart. The war chants of the Sisters can call down the Night Warrior's wrath to smite their foes, and their prayers to the Mother Moon can nurture even the gravely wounded back to health

Elune (or Mu'sha, as called by the tauren) is the major deity worshipped by the night elves. She is associated with the larger of Azeroth's two moons, the White Lady, and is widely considered to be the mother of Cenarius, the forest lord and patron god of all druids. Elune is one of the few true deities of Azeroth. She nurtured and sheltered the earliest living beings of the world as they awaited the first dawn, giving them the chance to thrive and to grow into the present myriad of life, along with all the possibilities and promises that it entails. In tauren mythology, Elune is revered as the left eye of the Earthmother, though she is not worshipped as a sentient deity by the tauren.

Strongly associated with healing, tranquillity and harmony, the moon goddess Elune has been revered by the night elves and several other races since the earliest ages in Azeroth's history. However, the Mother Moon is not a goddess who advocates peace at all costs. Indeed, one of Elune's aspects is the Night Warrior, who is said to lift the souls of the valiant fallen from the battlefield and set them riding as newborn stars across the eternal nightsky. 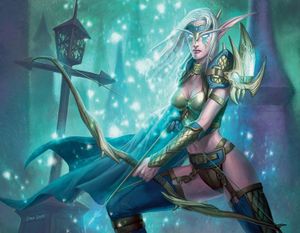