Ghouls act as the shock troops for the Scourge. These lumbering, rotting corpses were once innocent townsfolk who have made the final transition into true undeath. Ghouls have great stamina and revel in combat with living beings. Ghouls are ravenous cannibals who can replenish their health by devouring the flesh of fallen warriors, friend and foe alike. Ghouls are the main forces of the undead Scourge. They are vicious creatures, retaining little of their humanity. The plague has torn away most of their memories, leaving only hunger and basic survival instincts in their place. Ghouls are feral and animalistic and are often considered to be the lowest form of undead. While generally humanoid in appearance, a ghoul is easy to recognize on the battlefield by its pallor, hunched-over posture, and feral face. Even those who were close to the individual in life have difficulty recognizing their loved one; the transformation removes most vestiges of humanity as well as identifying features of voice and body structure. Ghouls of the Scourge are strong fighters, but they are not particularly tough. Their ability to regenerate, coupled with cannibalizing the dead, makes them far tougher opponents than they may seem. Because of their limited intelligence, their greatest tactical insight is to hit something until it’s dead. Thus, more intelligent beings often direct ghouls of the Scourge or send them into suicide situations where no tactics are needed. Ghoulish tenacity and fearlessness make them feared and loathed opponents (as does their habit of eating slain foes). They have some animalistic cunning when it comes to ambushes and other primitive attack strategies. They do not use weapons (having little brains with which to understand the concept) and fight with their bare hands or with a club or other found item.

An old video by Trump shows him reacting to a Ghoul being revived by Redemption and being buffed by its own death, thinking 'it ate itself'.[1] Actually, it is buffing itself from the Spellbreaker's death - it was played second and died simultaneously. Flesheating Ghoul cannot trigger off the same death that summons it.[2] 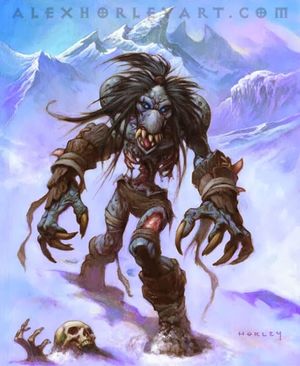